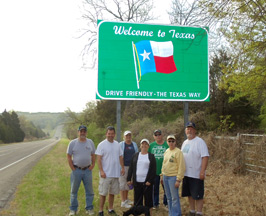 April 1st, 2nd, 3rd. 2011 Lone Star Vans hosted XXXIII at Lake Texoma right on the Oklahoma / Texas border. One week after Freeze-Out and 30 degree weather to the upper 80's. This year’s theme was April Fools Truck-in.
Several Vantasia members made the trip down south. The retirees left on Thursday morning, Jack & Carol and Wick. They made a pit stop at Bill and Patty's in Grove, Oklahoma. I think they also made a donation to the Indian Nation (casinos). Becky and I, Keith rode down on Thursday night after work and met them at Bill & Patty's.
Friday it was up and on the road again, like a band of vanners we go down the highway. 69 HWY. lickety split as Carol would say. We arrived at the grounds around 1 PM. Charlotte was busy getting things ready for the event. It was held at a State Park so there was a curfew on the music to turn it down low at 10 and off at 10:30. I was playing both nights.
We got set up and started visiting with our friends from the south. It was good to see Harry and Linda there from their southern residence. They are making their way back up north for the summer. 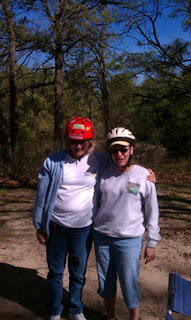 Later that afternoon the partying began. We were drinking Jim Beam out of the bubble not thinking about tomorrow. There were those who fall down on a regular basis, and then there's Becky who fell face down and skinned and bloodied her nose and bruised her legs. She blamed it on the oversized ant hills. I think the double bubbles had something to do with it. After the park ranger made his 3rd trip by, I figured I better shut down the music. It didn't stop the campsite to campsite parties, especially at Art & Ginna's camp where Jim Beam was still going strong. I guided Carol back to our camp to find Becky hugging a tree. 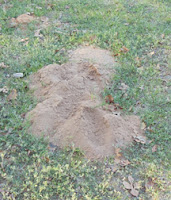 Saturday brought a new day and some old friends showed up to make it even more special. Ray & Star showed up around 12. Ray has been fighting cancer and going through chemotherapy. He looked good considering all that he has been going through. They both have lost a lot of weight. Later that afternoon Bandit showed up, He hadn't been there in several years.
Donnie was in charge of their games, the first being horse shoes where everyone had to throw 4 shoes and who ever had the highest score won. The girls complained it was too far so they shortened the throw for them. I was tied for first till then. Out of nowhere Becky threw two ringers and a close one 7 points which took first and Carol with 5 points for 2nd place. Wick was busy cleaning up the Nemo Van for the show-in-shine , which paid off for the Best Overall award. Congrats to Wick. Long Distance is something I have never won at a Texas Truck-in and as usual it went to someone from Texas. This year it went to Harry & Linda Hughs at 670 miles to our 475. Everything is bigger in Texas including the State itself, and ant hills according to Becky. Jack took 2nd in the tennis ball golf game. After the games it was time to get everyone's dish for the pot luck dinner. Lone Star provided the meat: a Turkey, Brisket, Ham and Ribs. Marty & Joyce smoked all the meat on their custom made Texas style smoker. Everyone else brought desserts, salads, potatoes, corn and all the other southern style fixin's. I have to say the food was great. Then came the awards and some group photos of the present Lone Star Van Club. I reminded everyone to come up and party early before Yogi Bear the Ranger shut us down. 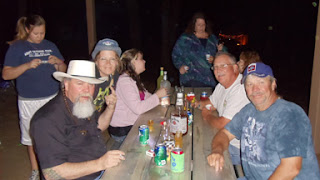 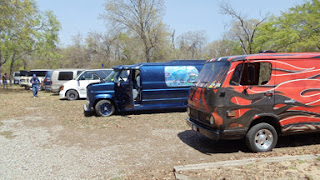 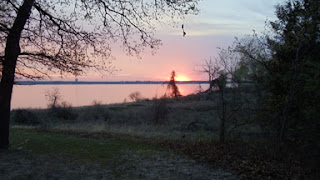 Ray & Star left as he was getting tired, and He said he would see us all at Spring Fever. I told him not to worry about coming, to stay home and get well. He said they would be there if the doctor said it was ok. I told all the Texas Vanners how much it meant to our club last year when they as the Texas Van Federation brought 10 vans up to Spring Fever. For those who have never made it down to one of Texas Van events, you don't know what you’re missing. They are so glad to see out of state vans & vanners. And I know I have said it before, there's a lot of truth in the words Southern Hospitality. I have never had a bad time at a truck-in, regardless of what part of the country it is in and van-in is different in its own way. Sure they all have Van's but the truth is, it's about the people, the friendships that you make across the country, the traveling down the highway with vans in front of you and behind you, it’s a lifestyle we all love. 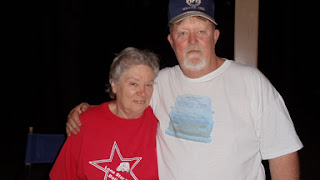 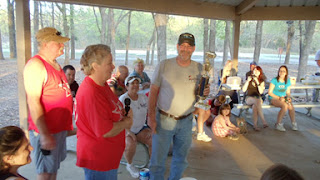 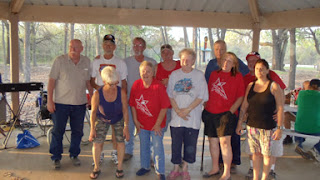 As the party went on during the night there was a new twist to the double bubble with Bloody Marys inside them. The result is still the same, lots of drunks out wandering around. Wick, Carol & Keith outlasted the rest of us by staying up way past curfew. Sunday it was time to say goodbye and head home.
We had to make a pit stop in Pittsburgh , Kansas to meet a old vanner who called me while at the truck-in. Gary McCabe  from Vanomite Van Club. He is getting a few old members back into vanning and wanted some flyers, so we met him and I gave him some from my collection of events throughout the summer and fall. Hope to see them at some van-in's. Gas prices varied the cheapest in Pryer, Oklahoma at $ 3.29 to 3.59 in several places throughout the trip. Lone Star thank you all for a great time, and the warm weather and the southern wind blowing us back home on Sunday. See you all down the road.
Don Noone / Vantasia Vans.
Posted by Heart of America Van Council at 10:09 PM No comments: 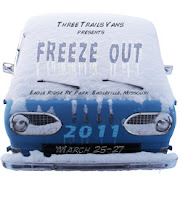 Through Rain, Sleet and Snow, 29 dedicated Vans and Vanners came for a weekend of fun, & friendship on March 25, 26 and 27, 2011 at Eagleville Mo.  Attendance was a little down from last year probably due to the weather. 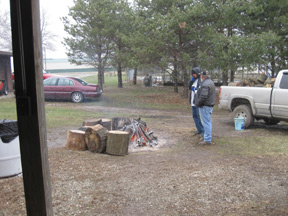 When I arrived there was the usual bonfire and several hands to help me unload the DJ equipment. Very much appreciated, I might say. TTV made the party room a little smaller to keep the heat in. The usual fixin's - Chili and hot dogs, free beer and shot bar. I will say we did miss Big Mike’s dog stand. But mostly we missed Mike and Wanda. With the room smaller it not only kept the heat in but the after affects of the chili. It seems to happen every time a certain person entered the room. I won't mention her name but she wore a crash helmet and loves to dance to camel toe song. 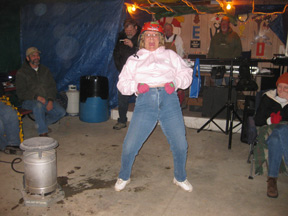 We were also missing several other vanners for specific reasons. Gary & Jean Shoulders had already planned to miss this year for their 50th wedding anniversary trip to Hawaii. There was almost a sudden change of plans when Gary wasn't feeling well and went to the hospital. He ended up having to have a stint installed. The doctor released him just in time for the trip with a few stipulations he could go on the trip. Not to overdo it and not to carry anything over ten pounds. So Jean had to haul the luggage and help him go to the bathroom, Ha! Ha! (just kidding). Our thoughts and prayers were with them. Congrats on the 50th and hope you have a lot of fun. Back at the truck-in we were also missing someone that had became an icon around the fire and that was Vince Eckmam who passed away last year. Gone but not forgotton. 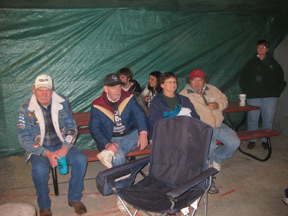 Jeff and Cindy and Raoul came from Colorado and received long distance award and some cash donated by Mike Phillips after winning the 50-50 pot he donated half to them for the long haul. I had planned to drive the chevy van, but with the forecast I ended up driving the suburban. It was a little hard to sleep in. Becky didn't make the trip due to her pussy cat being very sick. Taz & Jill also made a long haul from up north and Matt and Sherri from IL. 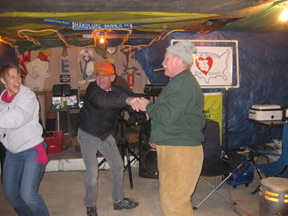 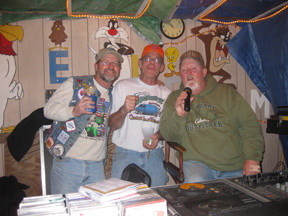 At the HOAVC meeting CIV filled everyone in on the progress of Colfax, Iowa fairgrounds where their event and HOAVC will be held. Despite the weather conditions I think everyone had a good time. And although they are not the only ones that fight the elements, Three Trails deserves a big round of applause for keeping a truck-in tradition alive. Now we just need them to deliver the mail.
Thanks Don Noone / Vantasia
Posted by Heart of America Van Council at 4:09 PM No comments: